All Collections
Essential Perpetua Amazon Concepts
What is the ad engine doing?

What is the ad engine doing?

What's going on in the background when you're not making changes to your Perpetua goals.

When ACoS is near Target ACoS

Let’s talk about what the ad engine is doing without user interference. This is good to know so that you’re not manually doing these tasks yourself, or so don’t do anything that’s unknowingly interfering with the ad engine’s optimization.

As a whole, the ad engine is trying to ensure that the aggregate ACoS of all the targets (keywords, ASINs, category targets etc.) within a segment is near your Target ACoS.

The ad engine prioritizes sales over ACoS. That is to say you may see some targets which perform slightly higher than your Target ACoS because they drive significant sales volume. 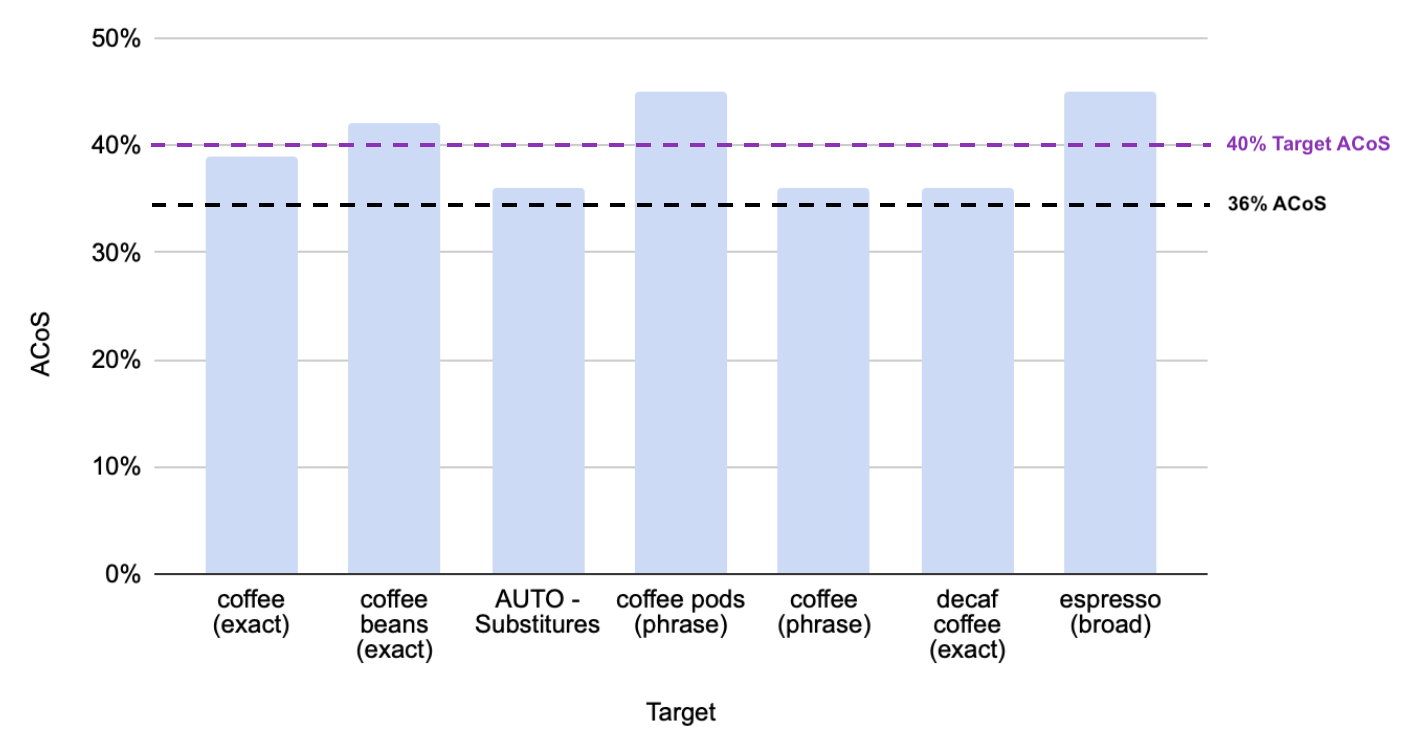 The ad engine is increasing the bids on terms that are driving sales and performing below the Target ACoS in an attempt to maximize sales.

The ad engine is also being more exploratory when bidding because it is beating the target that was set and has the room to test new keywords.

In the above example, the ad engine is going to experiment with higher bids on terms like coffee (exact), AUTO - Substitutes, coffee (phrase) and decaf coffee (exact) in an attempt to drive more sales since they’re performing below the Target ACoS. The ad engine may experiment with higher bids with the other terms as well, as long as it has a minimal impact on the overall ACoS of the goal. 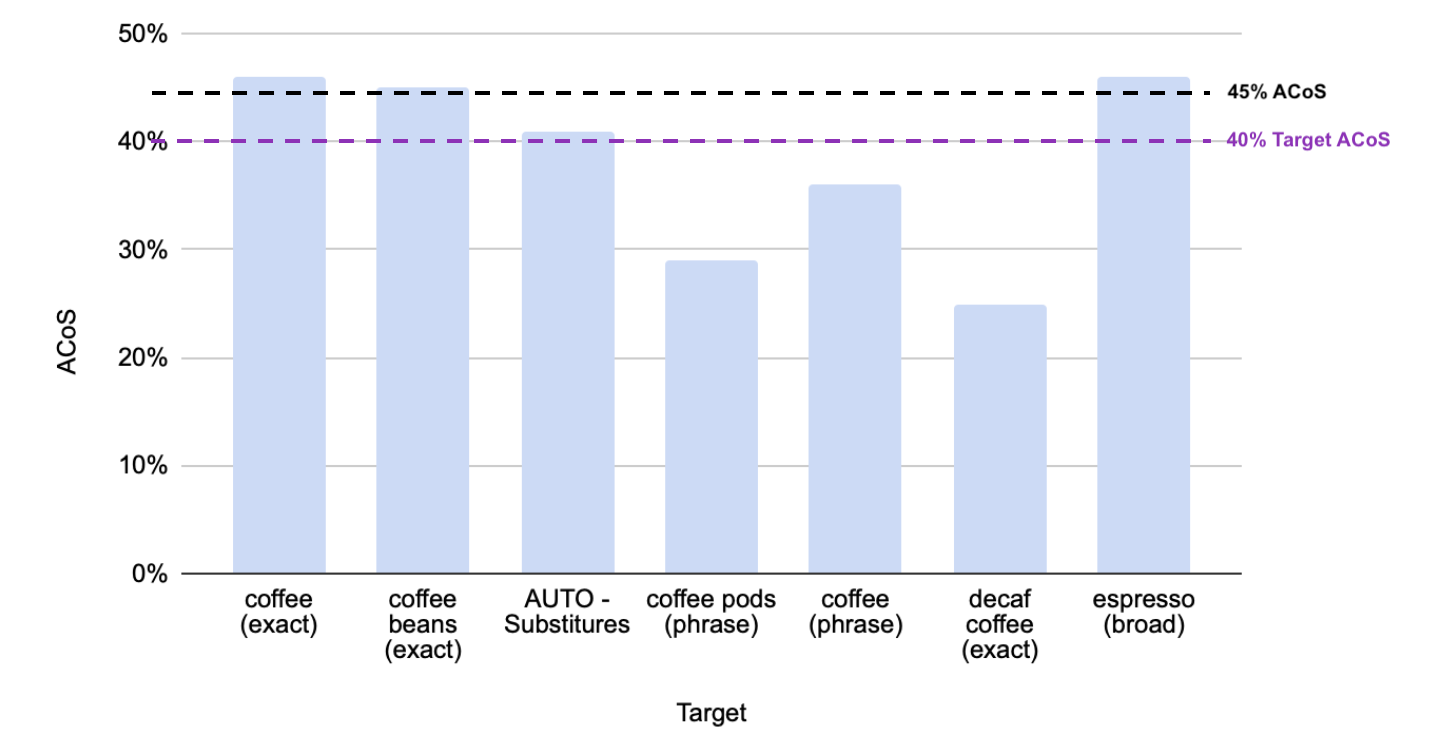 The ad engine is lowering the bids on targets that are increasing the ACoS of the segment above your Target ACoS.

You don’t have to lower your Target ACoS even further or necessarily pause or bid adjust downward any targets - this happens automatically.

In the above example, the ad engine will lower bids on the terms coffee (exact), coffee beans (exact) and espresso (broad), since they are driving up the overall ACoS of the goal.

When ACoS is near Target ACoS 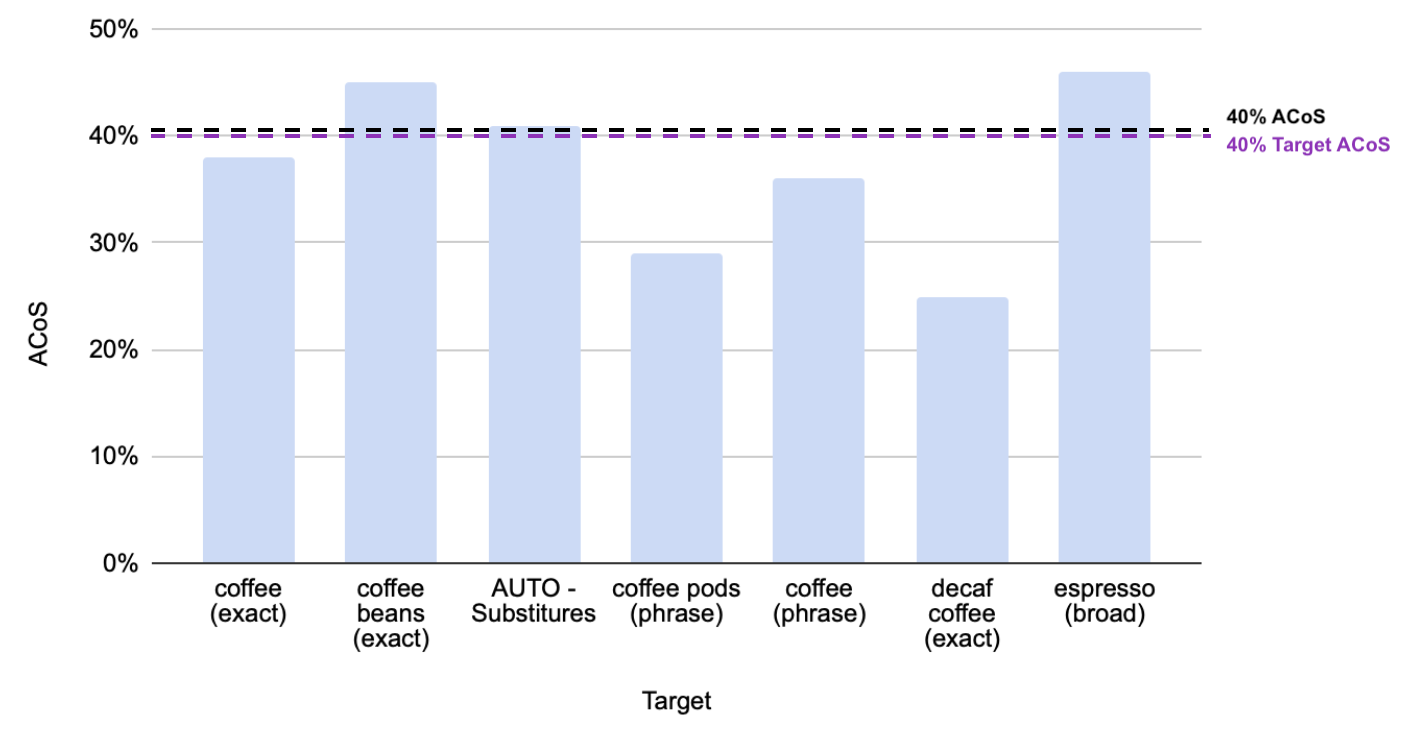 NOTE: This article is a simplification of what's happening. In actuality, the ad engine is recalculating the bids (and not just arbitrarily increasing/decreasing them) based on historical performance data to determine what bid will help achieve the Target ACoS.

Going dark mitigation comes into play when Perpetua sees your campaigns are going dark before the end of the day.

If campaigns within a particular segment are going dark, Perpetua will lower the Target ACoS in the background to make your budget last longer.

By lowering your Target ACoS in the background, the ad engine is effectively emphasizing the top terms that drive the most sales at the best ROI rather than spending the budget on lower potential terms.

Article last updated Jul 18, 2022. If you find this information to be out of date, please contact hello@perpetua.io.